Marklin, Bing, and Carette and others from Europe, and Ives, American Flyer and Lionel from America. In regards to numbers of collectors, no category matches the numbers of members devoted to toy train collecting. We feel privileged to have offered many of the outstanding collections to the train public and will continue to pursue the same excellence in the future. 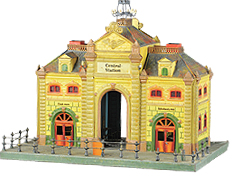 An exceptional piece, this scarce Marklin grand central station had a realistic appeal from the refreshments to the cloak rooms, highlighting our May 2014 sale. Est. $6,000 – $7,000 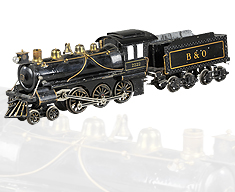 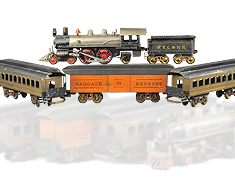 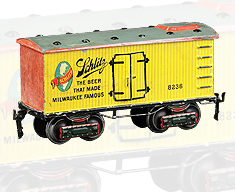 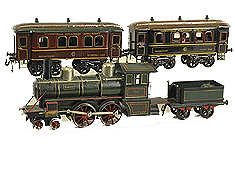 When most people hear of expensive German tin trains, they usually think of Marklin, but this Bing train set proved to be just as beautiful and desirable in our November 2010 sale. Est. $2,000 – $3,000 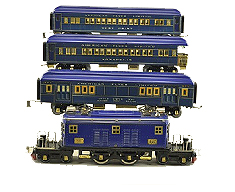 A never played with, boxed example of the very popular American Flyer Presidents Special train set was a highlight for the American trains in our November 2010 sale. The trains were taken out of the original wax paper in order to be photographed. Est. $2,000 – $3,000 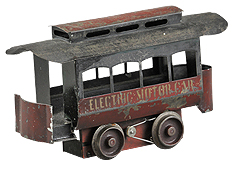 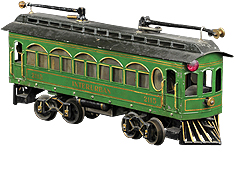 A scarce and very early example, this electric powered painted tin trolley as offered from the Dick Claus collection in November 2012. Est. $14,000 – $15,000 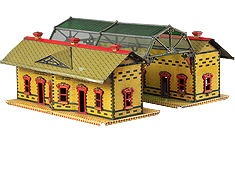 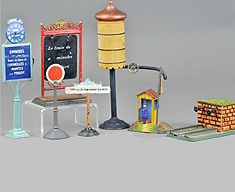 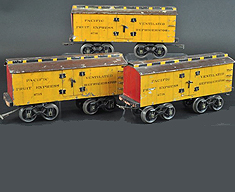 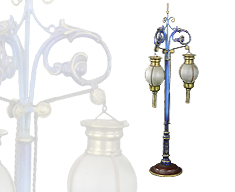 Missing one of the glass globes did not bother these collectors, surpassing our highest expectations in the September 2012 sale, this rare triple globe street lamp was a highlight. Est. $4,000 – $5,000 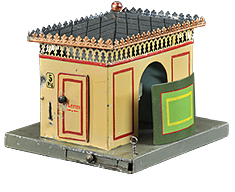 A rare public toilet by Marklin Germany with coin deposit slots to allow use of the mens and women’s facilities was a quite unusual piece from the Paul Ingersoll Collection in September 2012. Est. $7,500 – $8,500 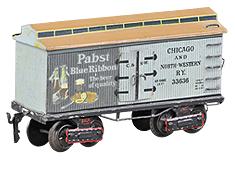 A very desirable example of the early Marklin beer car advertising Pabst Blue Ribbon was offered at our May 2014 sale with great paint and details. Est. $12,000 – $15,000 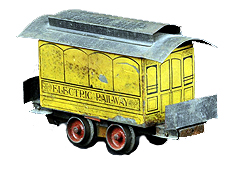 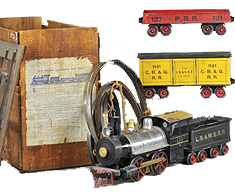 From the Frank Loveland Collection of early trains comes this boxed set by Carlisle and Finch, offered in our May 2014 sale, it went well beyond the estimated price. Est. $2,500 – $3,250 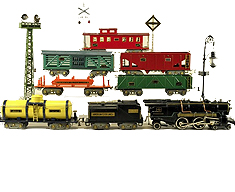 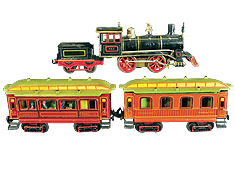 A scarce German gauge 1 passenger set was offered in September 2012 sale from the Paul Ingersoll Collection, with fine details throughout it tripled its high estimate. Est. $3,000 – $3,500

Lorem Ipsum is simply dummy text of the printing and typesetting industry. Lorem Ipsum has been the industry’s standard dummy text ever since the 1500s, when an unknown 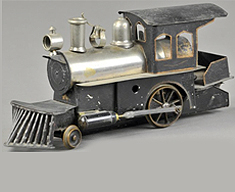 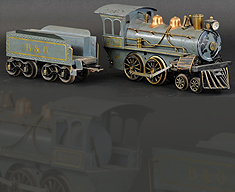 Far surpassing the expectations and estimations, this well detailed 2100 locomotive from Voltamp steamed across the auction floor in November 2013. Est. $2,500 – $3,500 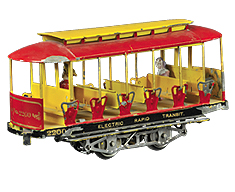 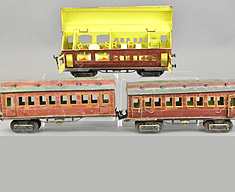 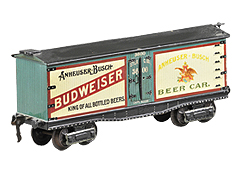 Another popular and scarce Marklin example, this hand painted Anheuser-Busch Budweiser car brought a commanding price at our May 2014 sale. Est. $6,000 – $9,0000