The ingenuity of early toy makers is revealed quite amazingly with the incredible clockwork actions allowed in their many designs. An absolutely brilliant use of clockwork gears as used by watch makers gave a new intensity and rise to the popularity of today’s prized toy examples. 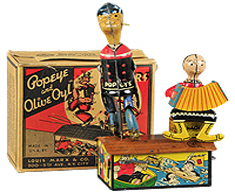 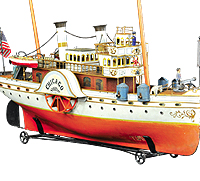 This circa 1900 clockwork paddle wheeler set a world record for highest priced toy ship ever sold at auction. A true masterpiece of German craftsmanship. From the Dick Claus Collection November 2012. Est. $200,000 – $250,000 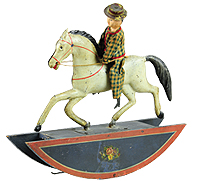 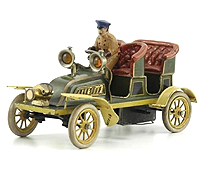 This is one of the earliest and certainly most elegant in Bings line of touring cars, this pristine condition auto sold in the second Donald Kaufman auction in September 2011. Est. $18,000 – $22,000 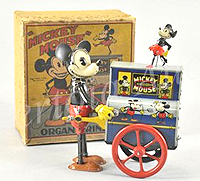 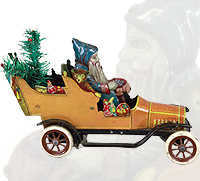 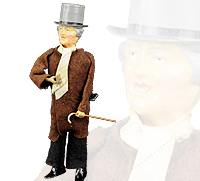 A rather scarce figure by the poplar French manufacturer Ferdinand Martin, this fancy gentleman was in attendance at our May 2013 auction. Est. $2,500 – $3,500 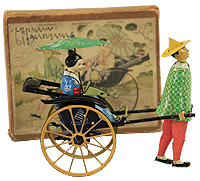 The German company Lehmann has always made creative and whimsical toys, collectors turned up in attendance at our June 2011 sale to bid this one more than four times the estimate. Est. $1,500 – $1,700 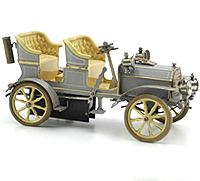 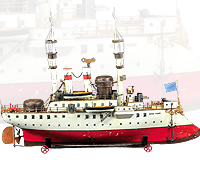 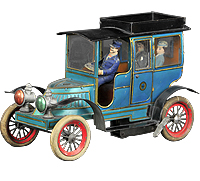 Extrodinarily rare in any condition and any color variation, this Gunthermann auto with passengers was a highlight of the November 2013 auction. Est. $10,000 – $12,000 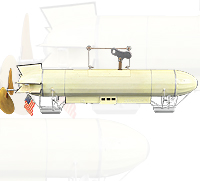 Largest of the zeppelin series by Marklin, this 17 inch length piece in excellent original condition flew past the estimations at the May 2012 sale. Est. $8,000 – $10,000 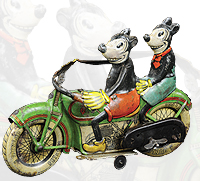 Considered the holy grail of the motorcycle toys in existence, the Mickey and Minnie Mouse riding motorcycle is both large and colorful. Featured in the November 2013 auction, the cycle proved its position as the most sought after comic toy. Est. $25,000 – $28,000 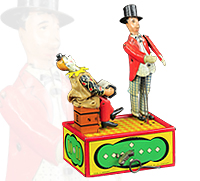 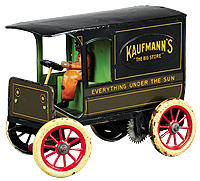 Circa 1920s Han Eberl delivery truck adverisiting the Kaufmanns department store, toy from the Kaufman collection which had nearly every toy under the sun. Est.$4,000 – $5,000 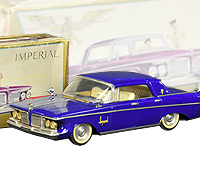 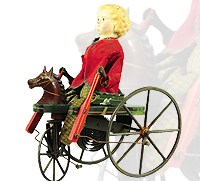 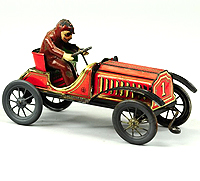 In a rarity versus condition match up, rarity drove to bidders to fight for this Hans Eberl open racer significantly higher than the estimated price. Est. $600 – $750 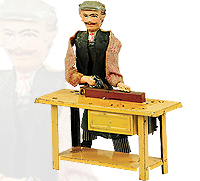 A rare French toy by Ferdinand Martin was offered in our September 2011 auction, nearly quadrupling the high estimation. Est. $2,000 – $2,500 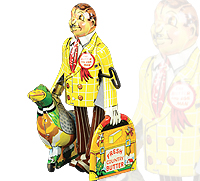 A scarce and desirable comic character addition to any collection, this Marx toy soured to a strong finish at our March 2014 auction. Est. $600 – $750 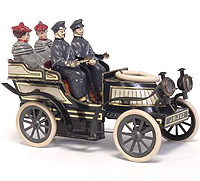 This extremely rare example is seldom seen, a fantastic example of a Gunthermann auto with original passengers from the Donald Kaufman auctions. $20,000 – $25,000 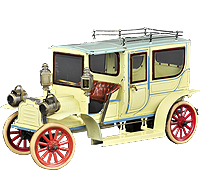 German luxury automobiles at its best, known as the finest example of its type, this Kaufman Collection auto surpassed our greatest expectations. Est.$18,000 – $23,000 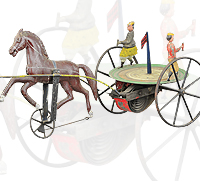 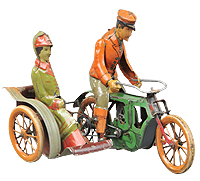 A scarce and desirable example of the German manufacturer M&Ks motorcycle with sidecar and rider was buzzing at our May 2014 auction. Est. $5,000 – $7,000