Without doubt, the merriest of collectibles… Whether you collect Christmas, Easter, Halloween or Valentines, nothing puts a quicker smile on a collector then a fine example from, say, one hundred years ago, knowing it brought pleasure then, and still today. Please visit one of our Holiday sales… we’re sure you’ll smile a bit. 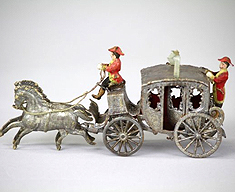 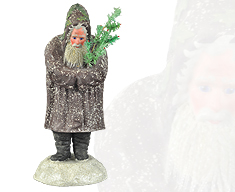 Tripling high estimate, this extremely rare German Belsnickle with glass icicles as a beard was the highlight of the Christmas group in our Novemeber 2013 sale. Est. $5,000 – $7,500 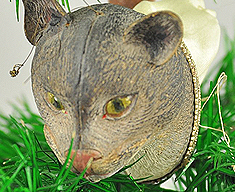 A fantastic Christmas ornament from the Tom Fox Collection, this Dresden smiling cat was a big surprise in the November 2013 auction. Est. $350 – $450 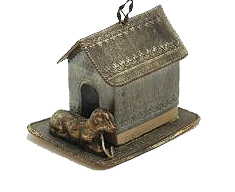 This fine Dresden example depicts a dog lying in front of embossed doghouse which lifts off base for candy storage, from our November 2009 sale. Est. $600 – $800 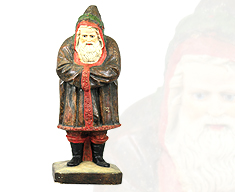 This was a very rare, spectacular Pennsylvania folk art, brown chalkware Belsnickle with a wonderful and well detailed face looking down over folded arms, a classic form of Pennsylvania Christmas folk art from the late 1800s, offered in November 2011. Est. $10,000 – $12,000 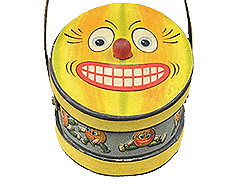 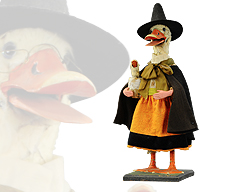 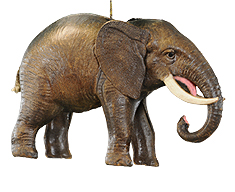 Far surpassing our auction estimate, this Dresden elephant with realistic ivory like tusks and glass eyes stomped its was to a big price in March 2014. Est. $600 – $700 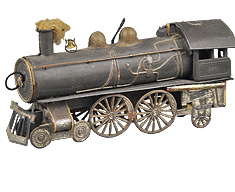 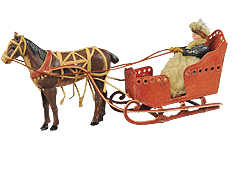 This is another exquisite example of German Dresden craftsmanship, a beautiful horse pulling the fine red sleigh from the Tom Fox Collection sold in November 2013. Est. $2,000 – $2,500 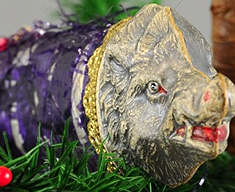 Tom Fox had one of the most detailed and fascinating Holiday collection we have handled in years, this Dresden popper was one of those examples from our March 2014 sale. Est. $1,600 – $1,800 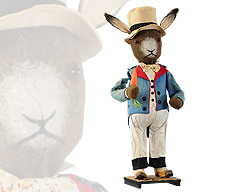 Dressed in his best Easter finery, this bunny rabbit nodder stood at 27 inch high and his head and carrot arm move when mechanism is activated, from our March 2014 sale. Est. $1,200 – $1,400 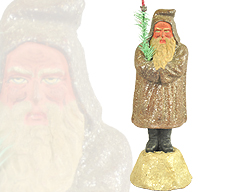 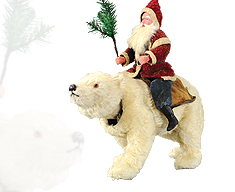 German made, this exceptionally large, furry polar bear nodder with glass eyes and Santa mounted on top was offered in our March 2014 sale. Es.t $3,500 – $4,500 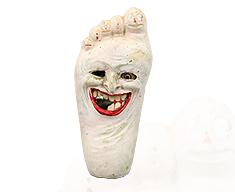 Given that a live candle was placed inside of these paper mache lanterns, they are quite scarce. This whimsical Halloween foot was a treat for a new collector in November 2011. $1,000 – $1,200 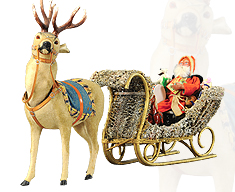 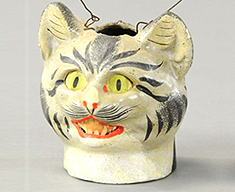 An outstanding example of a hand painted composition tabby cat Halloween lantern sold in our March 2014 auction several times over the estimation. Est. $500 – $600 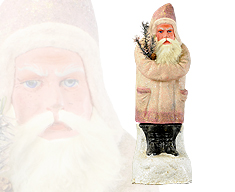 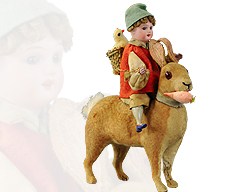 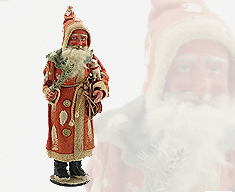 With an endearing hand painted face and rabbit fur beard, this wonderful German candy container was offered in our November 2009 sale. Est. $1,200 – $1,400