Almost exclusively American, the origins of cast iron toys with the plentiful iron ore in America fostered the endless supply of molded toys for the everyday family budget. We consistently feature a plethora of Autos, Buses, Taxis, Cycles and almost anything whimsical that once captured the delights of American childhoods. 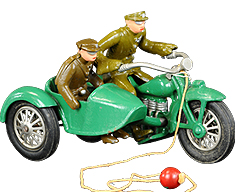 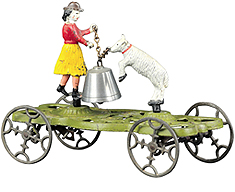 Considered the first bell toy by the Gong Bell Company, this near mint example of a whimsical toy was from the famous Max Berry Auction, March 2015 auction. Est. $3,000 – $3,500 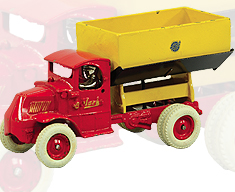 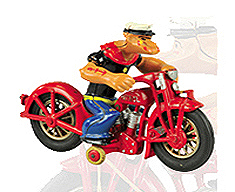 This 1928 Popeye on Motorcycle from the Bob Brady Collection was the original Hubley showroom sample attesting to its near perfect condition. Offered in our March 2012 auction. Est. $10,000 – $12,000 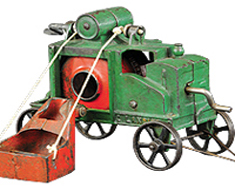 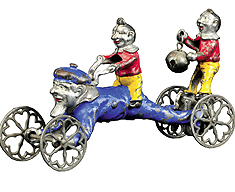 With less than ten examples know to exist of this piece, it is definitely a rare find, a whimsical and exciting cast iron toy sold in March 2015, courtesy of the Berry Collection. Est. $10,000 – $12,000 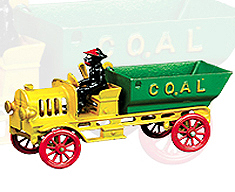 Likely the finest example known, this near mint condition Hubley Coal Truck was a featured piece from the Donal Markey Collection in March 2011. Est. $2,000 – $3,000 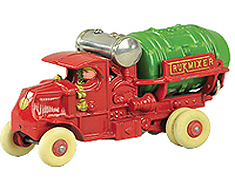 As close to mint as a cast iron auto comes, this rare example of the Hubley Truk Mixer nearly tripled the high estimate in our September 2012 auction. Est. $3,500 – $4,500 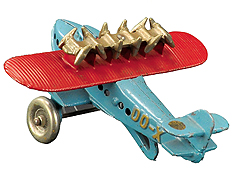 A great example of a very popular airplane, the largest in the series by Hubley Mfg in stunning condition, courtesy of the Bob Brady Collection. March 2016 Est. $6,000 – $8,000 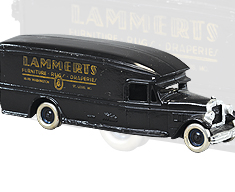 Considered by most as the finest example known, this Arcade White Moving Van advertising Lammerts furniture store is so minty, you can almost see your reflection in the paint! Sold in April 2011. Est. $8,000 – $10,000 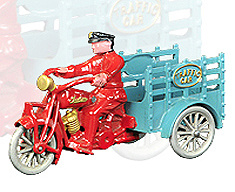 An incredible example of an otherwise usual mid-size version of the popular traffic car series by Hubley. Seldom offered as a near mint and boxed example, sold in November 2013. Est. $3,000 – $4,000 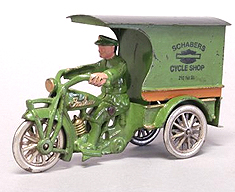 A very unusual example of a Hubley cycle with a low side body supporting a removable pressed steel enclosed van body. A highlight from the Donald Kaufman Collection sold in March 2009. Est. $3,000 – $4,000 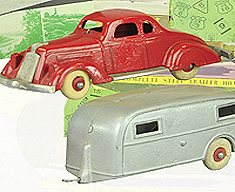 The extremely rare Nash Lafayette Coupe with trailer sold in our September 2012 sale and is the only specimen observed outside Kenton Museum in Ohio, a stellar piece for an advanced collection. Est. $7,000 – $9,000 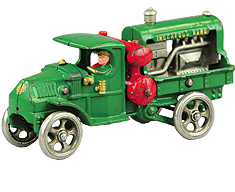 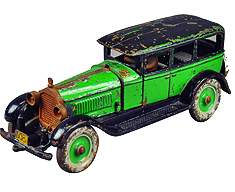 A classic cast iron luxury toy auto, seldom found in all original condition, offered in our May 2015 auction and significantly surpassing our expectations! Eat $1,500 – $2,000. 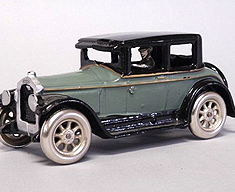 A striking example in virtually unplayed with condition soared at the March 2009 auction against its $6,000 – $7,000 estimate. 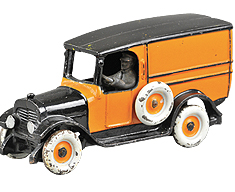 An excellent example originally from famed Gottschalk Collection, this Arcade panel van was a highlight of the cast iron automotive grouping in our May 2014 sale. Est. $4,000 – $5,000 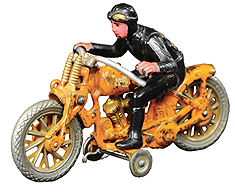 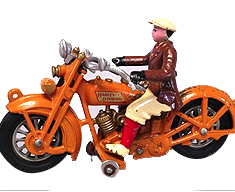 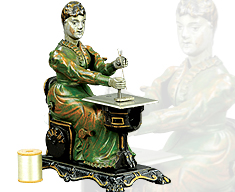 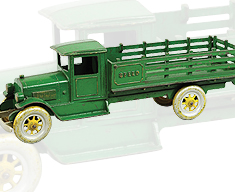