Horse-drawn toys, generally made of cast iron, depict the transportation of the time. Ranging from as early as 1880 and extending to the early 1900’s with transitional fire trucks, it was a common site around town to see a delivery truck, street trolley, or fire truck being pulled by a team of horses. Naturally the toy manufacturers capitalized on the chance to shrink down and duplicate such a scene for a child’s imagination to run. 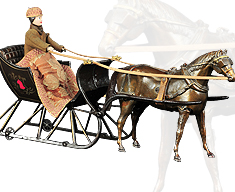 Considered by many collectors as the most beautiful antique cast iron toy ever created, the Ives Cutter Sleigh with the sole existing driver figure was one of the top lots of the Max Berry I auction in November 2014. Est. $100,000 – $150,000 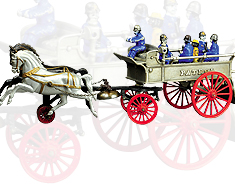 This rare 1890’s example was originally offered to the public at Bertoia’s 2011 auction of the Donal Markey collection, nearly four years later it proved a good investment for Max Berry when it was sold for nearly 50% more than he had paid. Est. $7,000 – $9,000 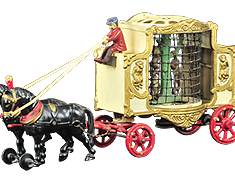 Indisputably one of the most amusing horse drawn toys in existence, the revolving monkey cage likely was too costly to produce, hence only three examples are known to entertain a few lucky collectors. Est. $75,000 – $95,000 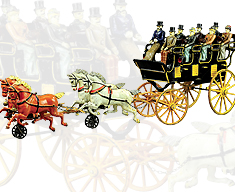 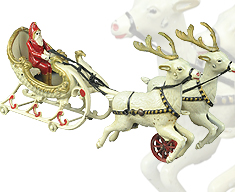 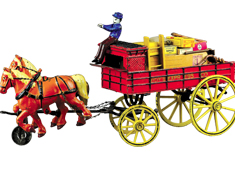 A beautiful example of a popular cast iron fire toy, this Pratt and Letchworth hook and ladder truck was a popular piece in the March 2011 auction. Est. $4,000 – $5,000 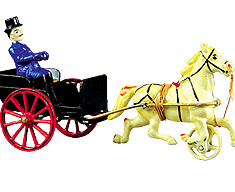 Truly a stunning example of a cast iron toy, this Wilkens horse drawn piece was yet another near mint condition toy form the March 2011 Donal Markey auction. Est. $4,000 – $5,000 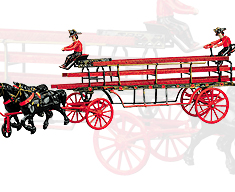 Doubling its estimation, another beautiful Donal Markey Collection piece proved that condition is the most sought after characteristic in antique toy collecting. Est. $6,000 – $7,500 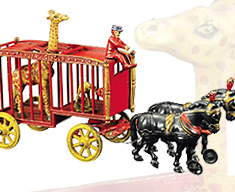 Setting a new price standard for the Hubley circus line, this beauty was from the Bob Brady Collection and had both strong condition and extreme rarity to establish a top price. Est. $7,000 – $9,000 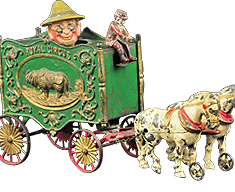 A popular toy from the Hubley royal circus series, this farmer found his way home for double the estimate in the September 2011 auction. Est. $2,000 – $2,500 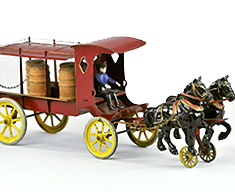 Far surpassing most expectations was this scarce Wilkens transfer wagon from the March 2012 auction. Est. $400 – $600 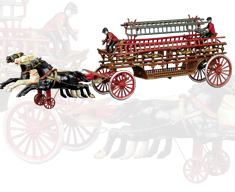 In cast iron toys, clearly size does matter. This beautiful oversized hook and ladder truck was offered in mint condition and even retained its original packaging paper. Est. $6,000 – $8,000 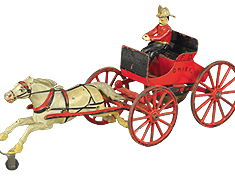 Offered at auction in a condition seldom found, this clean fire chief wagon nearly tripled its high estimate in the May 2014 auction. Est. $1,500 – $2,000 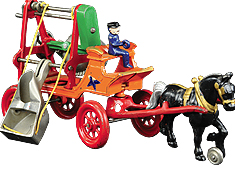 A bright and colorful Kenton toy in very clean condition found its way up and across the podium at our March 2014 auction . Est. $400 – $600