Early American dollhouses were greatly influenced by Dutch and German heritage and the few gifted makers from each country. Soon, by the early 19th century, specifically German companies were exporting a great deal of dollhouse furniture to the United States and as color lithography became easily-produced in the Victorian Era, rooms of dollhouses were often papered within creating brightly colored wallpaper and a whole new way of expression. Exquisite does not describe the beauty of a well furnished Doll’s house and the fun in collecting these miniature objects of art pales only to the joy of creating one’s own designs. 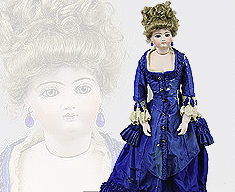 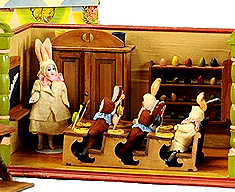 A wood school room bench and podium with six glass eyed children and teacher dressed in rabbit suits was a pleasant surprise for a new buyer at our March 2014 sale. Est. $1,500 – $1,800 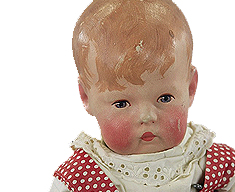 The facial paint was still extremely bright on this Kathe Kruse doll with painted features and molded and painted hair, November 2011. Est. $2,000 – $2,500 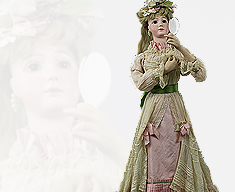 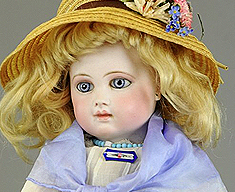 Earliest period portrait of Jumeau, this beautiful doll face had a missing leg, worn paint, and reset eyes and still doubled the low estimate of $3,000 – $4,000

Four rooms w/original floor & wallpaper, elaborate Victorian architecture w/gables, porches, balconies, bay windows and tower are some of the features which brought this beautiful dollhouse to the five figure mark in our May 2013 sale. Est. $8,000 – $10,000 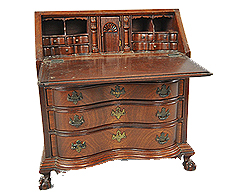 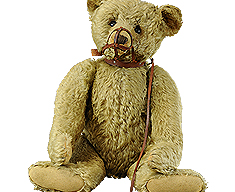 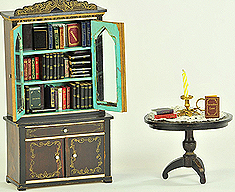 Large Boulle bookcase with glass doors on upper half and cupboard doors below, aqua paper interior, bookcase has leather covered books and wooden books from our March 2013 sale. Est. $400 – $600 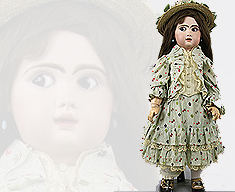 Seldom found closed mouth model with incised T-shape cut out in back of head with patented lever eye mechanism to allow eyes to open and shut as well as flirt from side to side from our November 2011 sale. Est. $5,000 – $6,000 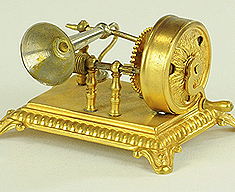 As you turn the crank, the interior wheel moves causing a clicking sound, there is also a horn mounted on a fan beside the wheel which can be moved too from May 2013 auction. Est. $1,000 – $1,500 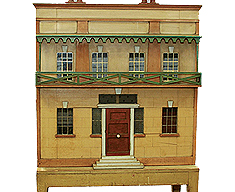